Special report: unit costs rise among all types of association

Social Housing’s analysis of data from the English regulator has found that unit costs have risen among all types of housing association, with overall maintenance costs seeing the highest weighted average increase of nearly seven per cent. Chloe Stothart and Robyn Wilson report 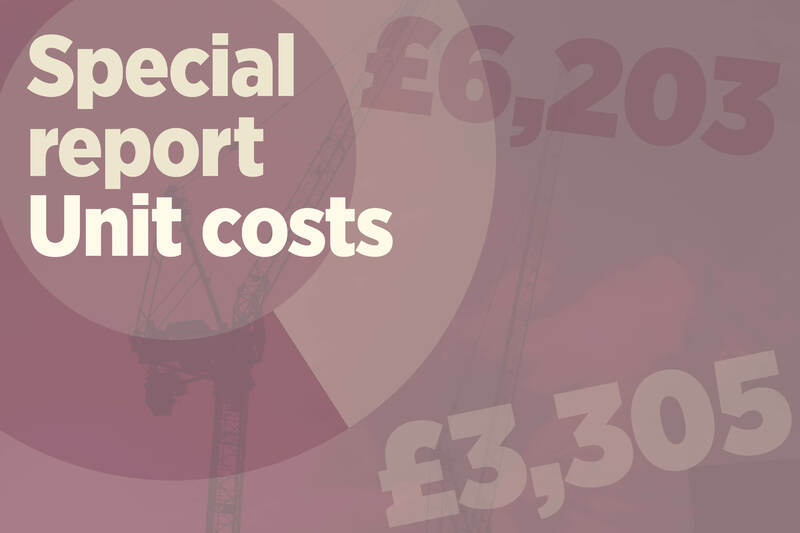 The weighted average cost of a social housing unit increased to £4,120 between 2018 and 2019, according to @RSHEngland data #UKhousing #SocialHousingFinance

Social housing costs have risen on average among every type of housing association, analysis of official government figures has shown.

The weighted average cost of a social housing unit increased to £4,120 between 2018 and 2019 (a rise of six per cent), according to the Regulator of Social Housing’s (RSH) unit cost data.

The 217 housing associations included in the data have been categorised as either stock transfers (LSVTs) or traditional by the regulator.

In its 2019 global accounts, the RSH said headline social housing costs per unit have risen over the past three years. It added that this was significantly ahead of general Consumer Price Index of inflation in the economy as a whole and was due in part to rising maintenance and major repairs costs.

On management costs, the RSH said increases were likely to be influenced by upward pressure on wages. It said unemployment rates remained at 3.8 per cent between August and October 2019, which had helped to create an increase in real wages.

The UK average total weekly earnings increased by 3.6 per cent compared to 2018 and by 1.8 per cent in real terms, so for those organisations with a significant number of staff being paid minimum wage or close to minimum wage, real costs of labour were likely to have risen by a higher proportion following the introduction of the new Living Wage rate (which is 4.9 per cent higher compared with 2018).

Overall headline costs across all the associations increased by more than 11 per cent to £11.25m. The largest headline average increase of nearly 40 per cent was seen in stock transfer associations that had their largest transfer seven to 12 years ago.

This was driven by a comparable 38 per cent increase in the number of social housing units managed by this HA type. Despite this, the average cost per unit for these HAs was smaller than the rest of the association types (just over three per cent).

The biggest increase in unit cost came from the LSVTs ‘under seven years’ group, which saw a 16 per cent rise between 2018 and 2019. This was driven by increases in costs for management and maintenance of 14 per cent and 13 per cent respectively. This is because LSVT organisations that are less than 12 years old tend to have
higher unit costs than other types of organisations.

The RSH explained that in their first 12 years after transfer, LSVTs typically have higher reinvestment metrics than the rest of the sector because of significant works to existing properties agreed as part of their transfer agreements. These providers also have average property values that are significantly lower when compared to the rest of the sector at the time of transfer.

Out of the 217 associations, 115 were traditionals. They accounted for more than half of the total headline costs, with £7.4m. They also had the highest cost per unit of £4,590.

As with past years, the 15 traditional associations with the highest costs all specialised in supported housing or housing for older people, with two-thirds of them having nearly 100 per cent of this stock type.

A third of them were also based in London – where overhead costs are more likely to be higher.

In contrast, most of the 15 traditional associations with the lowest costs have more than half of their social housing stock based in the Midlands and the North.

Look Ahead Care and Support had the highest cost per unit of £26,600. This was up more than 10 per cent on last year. Almost all of its properties are supported housing and half of its stock is in London, which both help to explain its costs.

In its financial accounts, Look Ahead describes itself as an “extreme outlier within the housing sector”, saying its unit costs “sit well above the sector median”, with over half of its costs directly related to support costs provided by its frontline staff, which do not exist within general needs housing associations.

Explaining further, the association said that supported housing delivers “far more services” to its customers than general needs stock does – such as paying for utilities, provision of furniture and higher volume of voids due to the nature of the services.

London-based Omega Housing leases private rented properties from other landlords for homeless families rather than owning them, and so in these figures it appears to have no stock. It saw the largest increase in cost per social housing unit of nearly 70 per cent, resulting in a cost per unit of £13,240. This was because of a rise in lease costs (mainly rent paid on leased properties) of £2.3m and a fall in units of 259. In its accounts, Omega says its lease arrangements with the landlords mean that generally it does not incur repairs and maintenance costs and does not guarantee rent.

A breakdown of what made up associations’ per unit costs – management, service charge, maintenance and major repairs – saw service charges accumulating the highest total.

The Abbeyfield Society had the highest service charge cost per unit of £16,650. It specialises in older people’s and supported housing, which incurs extra costs. In its accounts, it said food costs are also included in its service charges and these factors explain an extra £7,000 of cost per unit. It said it would undertake further analysis of unit costs.

At the other end of the scale, the 15 traditional associations with the lowest costs generally had a limited amount of supported housing and units for older people.

Platform Housing Group had the lowest unit cost of £2,350. It formed through a merger of Fortis and Waterloo Housing Group in October 2018, so comparable prior year data is not available.

Two-thirds of traditional housing associations saw a reduction in unit costs from 2018 to 2019.

The largest drop in unit cost was seen by EMH Group (22 per cent) to £2,610, despite having over 22 per cent of stock for older people.

On average the most recent LSVTs had the highest costs per unit (£4,210), which as previously stated is unsurprising since LSVTs spend their early years heavily in debt as they carry out the works promised to tenants as part of the transfer.

As a result, LSVTs have the highest spend per unit on major repairs, with the newest organisations spending the most on average.

As such, LSVTs under seven years old – Salix Homes and Gloucester City Homes – each had average unit costs over the total sector average (£4,120). Although both of these organisations respectively had four per cent and 11 per cent of housing for older people. Salix Homes’ headline social housing unit cost of £6,260 was up nearly 30 per cent on the prior year.

In its financial accounts for the year, the group attributed the high unit cost to major investment in its properties to achieve the Decent Homes target by 2020 and cladding works following the Grenfell Tower fire. Its 2020/21 target cost per unit of £4,173 is much more on par with a peer average, it said.

Byker Community Trust’s (BCT) unit cost of £5,080 was also higher that the overall average. Service charge (£1,470) and maintenance (£1,060) made up a significant proportion of this. Both housing associations manage homes built using non-traditional methods, which can cost more to maintain: 1960s new town stock for Silva and the famous ‘Byker Wall’ for BCT.

There were also a number of older LSVTs (over 12 years) bucking the trend of having typically lower costs per unit.

These included Tower Hamlets Community Housing (THCH) (£6,980), East End Homes (£5,790) and Poplar Harca (£5,720), all of which are located in east London, perhaps signalling again the regional differences in unit costs.

In its financial accounts THCH said its overall cost per unit had decreased by 10.1 per cent over the period, although it recognised that its costs were still higher than the sector average.

In its breakdown, maintenance made up 41 per cent of its unit costs. On this, the group said that fire safety works had increased over the period and added that over 2019/20 as well as the following six years it expects both planned and major works to increase.

“The board has set the challenge of reducing costs… so that the additional fire safety works can continue in 2019/20, while also investing in improvements such as new kitchens and bathrooms,” it said.

Of the three, Poplar Harca had a notably high management cost of £2,030 (compared with the total average of £1,050). East End Homes’ unit cost decreased by more than 20 per cent, according to the RSH’s unit cost figures for 2018 and 2019. However, its annual report records a far smaller rise, which it said reflected increases in operating costs as it invested in maintenance and major repairs.

Poplar Harca said its cost per unit increased because it had brought forward safety work on its estates following the Grenfell Tower fire, but it also had a temporary drop in its number of homes because some that were costly to maintain had been sold under its asset management programme. It said it now has an objective of no further material increases in social housing unit costs.

Social Housing has looked at the consolidated group-level unit cost data published by the RSH and broken it down into the provider types set out by the regulator. These are LSVTs, and traditional associations where none of the group is a stock transfer.

This report has not grouped organisations by the percentage of supported or older people’s housing they possess, as the RSH found no threshold below which the additional costs of these types of housing cease to be significant. However, this report includes the percentages.