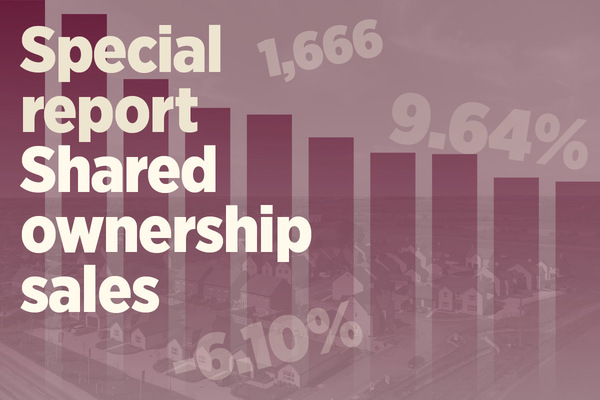 Housing association (HA) shared ownership sales saw a near-10 per cent rise across England during 2019-20, with a significant increase seen in sales in outer London.

A total of 12,396 first tranche shared ownership units were sold over the period in England – an increase of 1,090 sales.

The data compiled for Social Housing’s report is based on the Regulator of Social Housing’s statistical data return (SDR) for 2020. It showed that the bulk of shared ownership sales took place outside the capital (80 per cent), with London accounting for 19 per cent of sales.

Sales across inner London continued on a downward trajectory, decreasing by six per cent to 693 for the year. Outer London, however, which accounted for 13.4 per cent of England’s total sales, saw an increase of 19 per cent.

David Jubb, director of Greater London development at JLL, said there are a number of factors that could be driving the decrease across inner London, including the impact of competing products such as the Help to Buy.

“In London, I think a lot of shared ownership directly competes against Help to Buy,” he said. “On the face value, for the first five years, Help to Buy is a more attractive product on the basis that the purchaser is not paying any rent and, in effect, the equity loan they take from the government is interest-free for five years, so the outgoings on a monthly basis for shared ownership are significantly higher.”

He added: “People can also potentially afford a larger home with Help to Buy, because the 40 per cent loan drastically increases the value [of the property] they can purchase, and it doesn’t have an income cap so there’s more freedom with that.”

Mr Jubb added that “a tremendous amount” of properties had also been affected by the complications around cladding, including obtaining an EWS1 form (an independent assurance that the building’s external walls meet the government’s latest safety standards) for mortgage approval. He said this could be another reason for the decrease seen across inner London, which typically has larger levels of high-rise developments, compared with the more traditional housing seen in the regions.

The report also looked at the number of low-cost ownership homes that have not yet been fully staircased. This stood at 207,501 properties for 2019-20. Of these, 75 per cent were outside the capital, 14 per cent were in outer London and the remainder were in inner London.

Clarion had the largest amount of first tranche shared ownership sales for 2019-20, with 596 in total. This was a 22 per cent increase on the previous year.

In its company accounts for the period, the organisation said its first tranche sales income had increased by £16m, while its open market sales grew by £17m, reflecting its “growing development programme”.

Clarion has ambitious growth plans, with an intention to invest billions in new housing over the next decade. In its company accounts, it said it had more than 8,500 shared ownership properties, with 127 increasing the share they own during the year. According to the SDR, it has 8,644 low-cost ownership homes that have not yet been fully staircased.

L&Q had the second-highest sales with 575, which was up nearly nine per cent on last year. Discussing the sales market over the period, John Lumley, strategic sales director at L&Q, said the company had seen “a continued strong demand for shared ownership, demonstrating that it remains a popular, affordable route to homeownership for many”.

He added: “At the start of the 2019-20 financial year, pent-up demand after Brexit boosted sales. In early 2020, we were naturally concerned about the impact of coronavirus, switching to virtual viewings early in the first lockdown. One of the biggest challenges was mortgage availability, as banks scaled back their options, although this has largely returned to normal now.

“Sales remained strong throughout this period, and into this financial year – with schemes like Lock No19 in Hackney Wick and Marleigh in Cambridgeshire proving particularly popular. Larger homes – of two bedrooms and above – have become ever more sought-after, as customers increasingly want space to suit their working-from-home arrangements, and outdoor space remains a priority.”

Notting Hill Genesis followed after a 67 per cent increase in sales (478 units) – one of the highest increases seen among HAs and explored further later in this report. The group had 8,954 low-cost ownership homes that had yet to be fully staircased.

Possible correlations could be drawn between the HAs with the most sales and the local authority (LA) areas with the most sales. Vivid, for example, was in the top 30 HA list for sales. It operates in areas including Eastleigh, which was the LA area with the highest number of sales for the period after seeing a 105 per cent rise.

Eastleigh was followed by Central Bedfordshire, Hounslow in outer London, Tower Hamlets in inner London and Cheshire East. All in the top five are within commuting distance of London and Manchester, which could explain the high sales, Mr Jubb said.

In addition to having one of the highest numbers of first tranche sales, Tower Hamlets has one of the largest amounts of homes that have yet to fully staircase (3,256). It was topped by Milton Keynes and Southwark, which had 5,716 and 3,263 units, respectively, where owners had less than 100 per cent equity.

This report also looked at sales by size band, which has then been broken down to include/exclude the G15 members. It showed that the G15 sold a total of 3,095 units, up from 2,994 the previous year.

Sales within the 25-49 sales size band declined, which looked largely driven by another decline in sales from the G15 to nil, meaning the HAs excluding the G15 made up all the 1,132 shared ownership units within this size band.

Sage Housing had the highest increase in sales with 368 for the year, although this was due to it having no first tranche sales the year before.

Vivid, which was formed from a merger between First Wessex and Sentinel in spring 2017, followed with an increase of 215 sales for the period – or a rise of 98 per cent to 435 sales in total. In its company accounts for the period, its turnover from shared ownership first tranche sales for 2020 stood at £43.1m, up from £25.5m the year before.

Notting Hill Genesis, which describes itself as “the largest provider of shared ownership homes in the country”, reported the next largest increase in sales. It sold 191 additional units for the period, compared with the previous year. This represented a 67 per cent increase and took its total first tranche sales to 478. 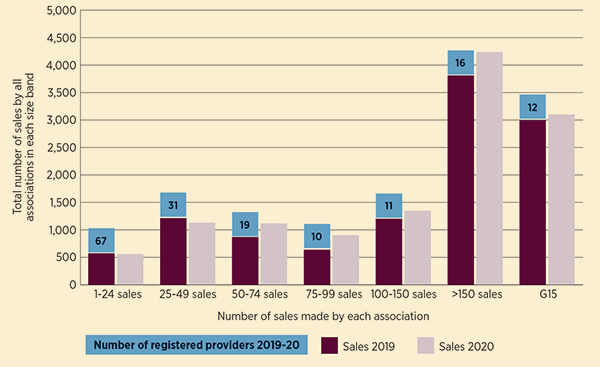 In its accounts for the period, the HA said its surplus on sales of private homes and shared ownership first tranche grew from £24.2m to £31.6m, despite challenging market conditions.

It said: “One of the challenges for 2019/20 was the high number of unsold homes. We entered the financial year with a total of 605 unsold homes. In the latter half of 2018, the board had become concerned at the delays in selling homes, both shared ownership and market sale, so had significantly reduced our programme before 31 March 2019.

“Nevertheless, there were still 2,411 homes under construction for sale, of which 973 (581 shared ownership and 392 private sale) were finished in 2019-20. We transferred a number of these homes to rental tenures and sold a total of 596 to individual purchasers, as well as executing a bulk sale and so finished the financial year with 610 unsold homes.”

The five LA areas that saw the largest increases in sales were Tower Hamlets, Eastleigh, Leeds, Brent and Medway. Tower Hamlets’ rise in sales of 139 units represented a 257 per cent increase to 193 units in total. It was followed closely by Eastleigh with 136 additional sales. Leeds, Brent and Medway followed with 83, 79 and 78 additional sales respectively.

The two HAs with the largest decreases in sales were Hyde and Sanctuary. They were unavailable for comment when contacted by Social Housing.

The five LA areas that saw the largest decreases were Southwark (-70), Tewkesbury (-65), Cheshire West and Chester (-57), Welwyn Hatfield (-57) and Chelmsford (-54). Several LA areas in this list were London boroughs, including Haringey, Wandsworth, Islington, Greenwich and Bexley.

Looking ahead, Mr Jubb said to expect shared ownership sales to pick up beyond 2022, adding that the ending of the Help to Buy scheme in 2023 would likely result in an increase in demand for shared ownership in the capital.

He said: “The future [of shared ownership] is essential for homeownership in a post-Help to Buy world. For the housebuilding industry, [Help to Buy resulted in] massive uptake and demand [because of its support in helping people to] enter the housing market. Without that, the only really other viable option for purchases on a consumer level is shared ownership.”

Social Housing extracts information from the Regulator of Social Housing’s latest SDR, which is broken down by subsidiary, and then repackages the information. As the SDR only records RPs larger than 1,000 units for the metrics used in the report, there are some gaps.

There are instances where RPs carry out their shared ownership business in a subsidiary, which because of its size is not recognised by the SDR.

In 2019-20, Aldwyck merged into Catalyst, Town & Country merged into Peabody, Stafford and Rural merged into Housing Plus, and Yarlington and Radian became Abri. The prior year data is not restated to reflect the subsequent merger.

Platform had 82 first tranche sales in the 2020 SDR. However, it said this only covered Q4 of the year and the figure should have been 363. We have changed their data in this report to reflect that.

The Week in Housing: the bleak reality of the housing crisis

Spending Review 2021: What is the housing sector calling for?