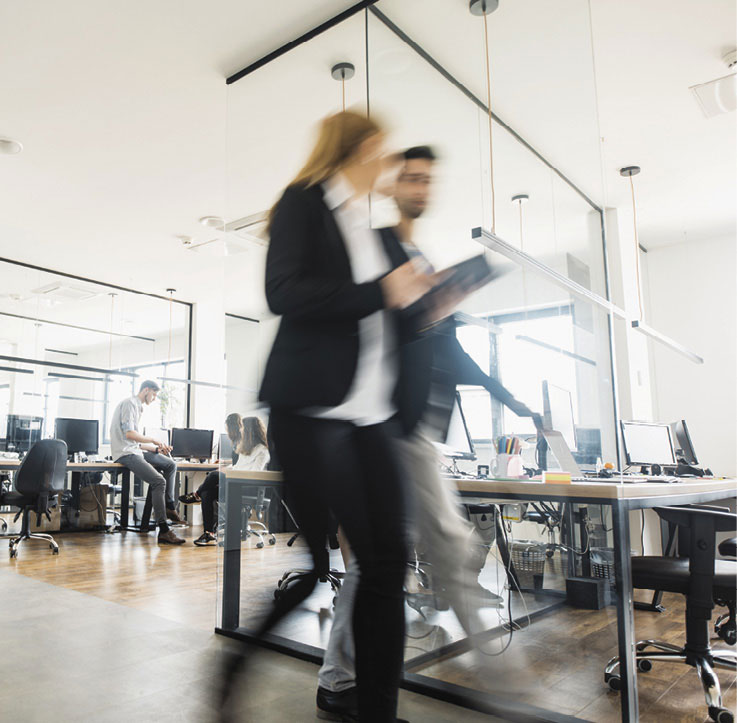 Over 80 per cent of small companies report all locations open. This compares with only a third of the largest companies, although a majority of them have opened more than half of their sites.

The study also highlights differences by sector. Over 70 per cent of life sciences companies report full reopening of offices, partly reflecting the difficulty of working from home in this sector. Banking & finance (57 per cent) and technology, media & telecom (TMT) (46 per cent) are reopening at a more deliberate pace.

The survey found that the majority of companies, and nearly 80 per cent of larger businesses – those employing more than 10,000 employees – are leaning towards some form of mixed or hybrid working pattern. Over two-thirds of companies favouring a hybrid model say their policies and approach have been set through consensus at corporate level.

“Size and sector differences are substantial in this area. Across the sample as a whole, 20 per cent support a full-time return to the office for most employees, but for small companies this rises to 63 per cent. Support for corporate-defined hybrid models is more than 60 per cent in the banking & finance and TMT sectors, while only about 50 per cent in life sciences.”

The office will continue to play a central – though different – role in how work gets done. Very few of the companies surveyed plan a fully remote solution and office-based work continues to feature prominently in their plans.

Nearly 80 per cent of corporates expect to settle on a workplace policy where work is either fully or mostly done at the office, or equally split. Only 15 per cent of companies expect a fully remote solution.

Companies are evenly balanced in their expectations for changes in portfolio size, with a third expecting to expand the amount of space they occupy over the next three years.

TMT companies are particularly optimistic, with over 60 per cent expecting an expansion in their portfolios. Expectations in banking & finance are much more balanced; the same proportion (just under 30 per cent) are planning for expansion as well as contraction, while a solid 40 per cent that expect no change.

The value occupiers place on flexibility will continue to rise, partly in response to near-term economic uncertainty but also for more strategic reasons. When asked about the percentage of flex space making up the company portfolio, businesses that have between 11-50 per cent of their portfolio in flex space, expect to see that percentage double over the next two years. Medium-sized companies and the TMT sector look particularly partial to the flex-space approach.

Holberton continues: “Two compelling reasons emerge for the rising popularity of flex: its use as a way of evaluating different occupancy models, and as a means of providing employees with more choice over work location and environment. The second of these is a particular driver for large companies and they are increasingly willing to experiment with different space type combinations and reconfigure space to reflect evolving employee preferences and learnings from initial pilots.”

When looking more broadly at factors that influence building selection, three factors dominate: flexibility, wellness and sustainability, especially air quality. Around 40 per cent of companies highlight sustainable design as a key factor, on par with those that value technology integration and 54 per cent cite indoor air quality. Large companies give the most importance to the full range of building amenities, consistent with the far-reaching changes in work practices and portfolio strategy that some are considering.

As companies move closer towards resuming office-based work, restoration of the features that may have been eroded during lockdowns are clearly top of mind, principally collaboration, engagement and fostering a strong corporate culture. The main implications for the workplace are enhancing or increasing collaborative areas (36 per cent), piloting new workplace strategies in select locations (33 per cent) and revisiting design standards (22 per cent).