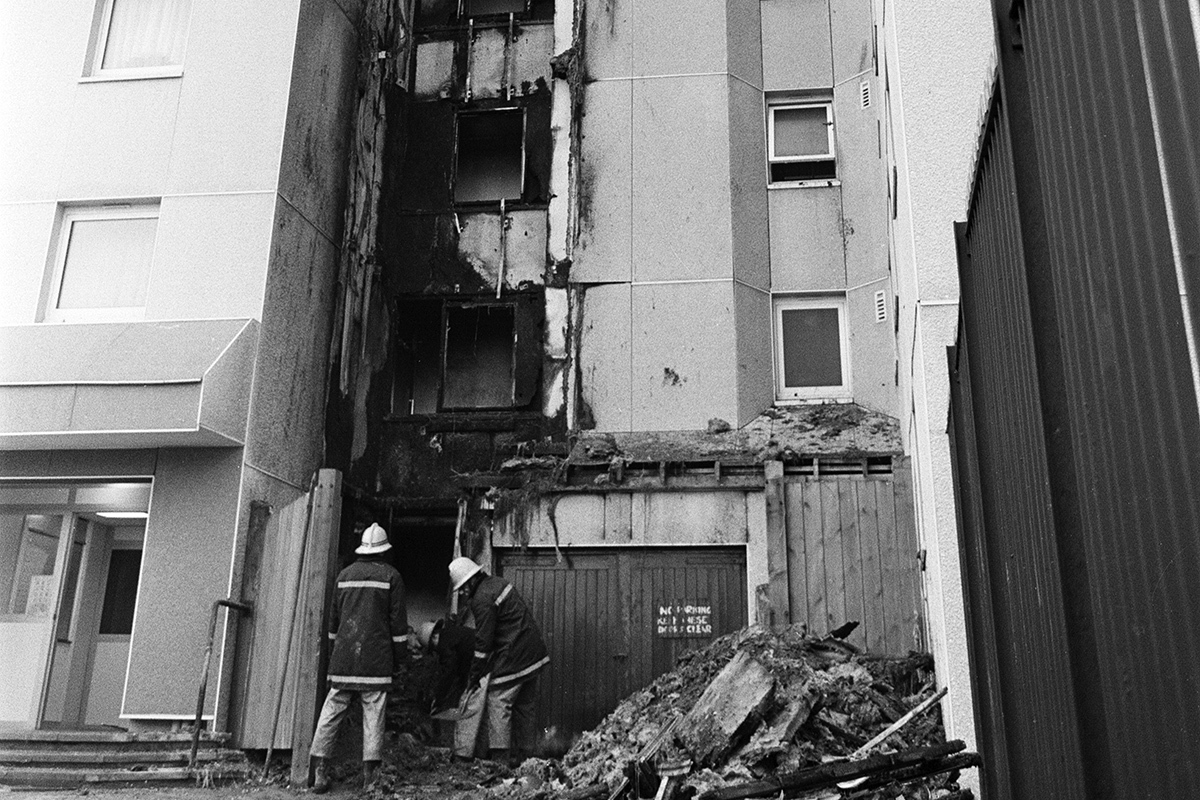 Knowsley Council led the project, but the BRE – then a part of the Department of the Environment – was called in to monitor the project.

A report on the project written by the BRE before the fire suggested enthusiasm to roll it out more widely. “The techniques and philosophy employed at Knowsley could be readily adapted to other multi-storey dwellings,” it says.

The cladding system used non-combustible mineral wool insulation and reinforced resin bonded cladding panels. But a 75mm cavity was not fitted with cavity barriers – in accordance with regulations at the time.

When arsonists lit a pile of rubbish outside the building, this cavity provided a chimney for the flames which affected all 11 storeys of the building and required a total evacuation of the block.

After the blaze a note from an Housing Management Estates Action (HMEA) official said the fire was “being treated as insignificant”.

“The block performed well, the fire doors were un-vandalised and in place (which is unusual for Merseyside), the building was evacuated easily, only three people were affected by smoke and all tenants returned willingly to their flats,” the official wrote.

A handwritten letter from the same HMEA official said the project “is of particular interest to the department in that Knowsley Heights is an Estate Action scheme and was overclad using techniques relatively new to public sector housing in this country but which are being replicated on other blocks”.

She made reference to a project in Lambeth which was “continuing to proceed” despite the fire.

Knowsley Heights was also fitted with new uPVC windows, smaller than the originals, with the gaps in the frames stuffed with combustible insulation.

These burned through during the fire allowing flames into flats – precisely what would happen at Grenfell Tower 26 years later.

The Knowsley fire did result in regulatory changes with official guidance in Approved Document B altered to ban combustible insulation on high rises and require fire barriers in cavities in all circumstances.

Previously, they had only been required if combustible insulation was being used.

Following these changes, in April 1992, an internal BRE letter notes the changes had resulted in “a great deal of pressure from the overcladding industry and demand for advice and testing”.

The letter notes that the BRE had developed a new testing methodology it was trialling at an airbase in Bedfordshire and says: “There appears to be a large potential for commercial funding for testing to follow on from a realistic test programme.”

The BRE, which was privatised in 1997, would go on to suggest the adoption of this testing within Approved Document B as a means of demonstrating compliance and charge insulation manufacturers to run tests, and ‘desktop studies’, which used test data to establish whether or not untested systems would pass.

Both of the main insulation products later used on Grenfell Tower – Celotex RS5000 and Kingspan K15 – had been included in systems which passed one of the tests at the BRE and were subsequently marketed as suitable for use on high rises.

The systems they were tested in did differ substantially from the way they were used on the tower.

“BRE is an evidence-based organisation and we have built our reputation on independence and impartiality. We would never compromise on these standards when it comes to the work that we undertake.”

A government spokesperson said: “We are taking action to improve building safety where successive governments have failed, including the biggest improvements to the regulatory system in almost 40 years through our Building Safety Bill and an unprecedented £5bn funding package to protect residents from the cost of replacing unsafe cladding.”