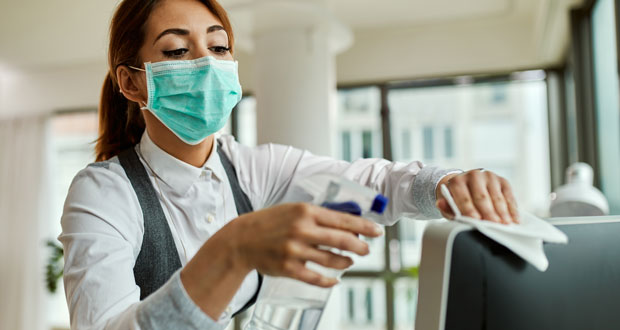 The British Cleaning Council (BCC), which is sponsoring the new proposed All Party Parliamentary Group (APPG) for the cleaning and hygiene industry, says it will push for the recognition cleaning and hygiene operatives deserve for the vital work they are doing in tackling the pandemic and in helping the UK to recover from it.

By providing cleaning operations, the UK cleaning and hygiene industry helps to keep other essential industries going, such as the NHS, food manufacture, key public services and transportation, so protecting the health and well-being of their workers, colleagues and the public, however, guidance currently does not specifically name cleaning and hygiene personnel as key workers, although ‘support staff’ in the NHS, education and other key sectors are identified as essential workers.

Additionally, the priority list for vaccinations is variable, and after the initial phases, the BCC hopes industry personnel will be among the occupations given higher priority because of the risks staff are exposed to during their work.

The BCC has been working to interest MPs in taking part in the APPG for the UK cleaning and hygiene industry and hopes Parliament will inaugurate it soon.

APPG members will decide their own agenda but the BCC will use its influence as the voice of the industry and the sponsor of the group to encourage them to address its concerns.

Chairman of the BCC, Paul Thrupp, said: “It is very frustrating that, despite months of us calling for all cleaning and hygiene personnel to be given key and essential worker status, it still hasn’t happened.

“Industry personnel are in the frontline in the fight against the virus, getting exposed to it in the workplace as they try to protect others.

“Without their bravery, the delivery of key services would be hampered by sickness among staff and the UK would be in more trouble.

“Cleaning and hygiene operatives will continue to play a key role in the future as we battle to beat the pandemic and get back to normality.

“It is vital that the Government recognises this by giving them key worker status and high priority for vaccinations. We hope the APPG will put this urgent issue right to the top of its agenda.”

The BCC is supporting an APPG for the industry to help raise awareness of the sector’s huge scale and importance, and to give the industry a voice in Parliament and ensure it can influence relevant decisions.

The BCC has been working alongside former MP for Stirling, Stephen Kerr, to attract MPs to join the APPG.

After inauguration by Parliament, MPs would elect their own chair and decide which issues they want to discuss.